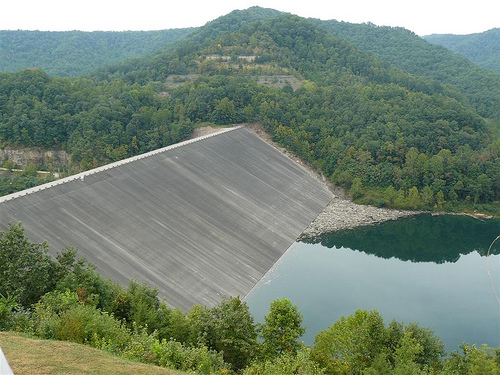 The project was originally called the Justice Reservoir during the planning stages. In 1965, Congress changed the name in honor of the late Judge R.D. Bailey, a lawyer, state senator, prosecuting attorney, and leader in Wyoming County education. Judge Bailey also was a circuit judge for Wyoming and mingo counties during the bloody coal mine wars of the 1920’s. The Guyandotte River has a history of significant flooding about every two years—causing death and property damage. Damages caused by the record 1963 flood totaled $8 million in the Logan area alone.

Congress authorized funding through the federal Flood Control Act of 1962. Work on the dam began in 1964 and was completed in 1980. The entire project cost $180 million, but during its first eight years of operation, it prevented $59 million worth of flood damages from occurring.

The dam is unique because it was the first “rockfilled” dam built by the Corps of Engineers. The dam is a carefully designed mound of compacted rock with a layer of steel-reinforced concrete placed on the upstream side of the dam. There are 5.7 million cubic yards of rock, 6.4 million pounds of steel, and 240,000 bags of cement. The lake catches runoff from a540 square mile drainage area. When storing floodwaters. The lake could raise a maximum of 120 feet above the typical summer water level. Under maximum storage conditions, the seven mile lake would increase to 22 miles and would contain 55 billion gallons of waters.