The Battle of Blair Mountain

In the upper watershed of Dingess Run near the town of Sharples is the site of the largest armed US insurrection since the US Civil War. Five days in late august and early September of 1921 approximately 12,000 miners confronted an army of police and strikebreakers backed by coal operators in an effort to unionize the southern coal fields of WV.  Their struggle ended only after approximately one million rounds were fired and the US Army intervened by presidential order.

Beginning in 1870’s coal operators established a system of dependency on coal miners by monopolizing the housing and material goods that could be purchased by the minders and their families. Uprisings and strikes to overthrow this type of control by the coal operators resulted in ‘private detectives’ being hired to intimidate miners into poor work and living conditions. These detectives would take trains through the towns to the middle of the night and fire weapons at houses killing and injuring men, women, and children in order to control the workers.

But by the 1920s most coal mining camps had been unionized except for West Virginia’s coalfields which were still under control of coal operator’s power. In the 1920s in the small town of Matewan, a young sheriff Sid Hatfield stood his ground against Baldwin-Felts detectives when they came to cause trouble for union organizers. When the gunfire ended, Sid Hatfield and his men had beaten the feared Baldwin-Felts detectives and became heroes to the minders throughout the area.

Over the next year low intensity warfare waged between miners and coal operators throughout the area and was made worse when coal companies brought in nonunion workers. Martial law was instilled in Mingo County and resulted in unlawful persecution of union miners over small infractions.

On August 1, 1921, Sid Hatfield and a friend were ambushed at the McDowell County Courthouse and were killed by Baldwin-Felts detectives. Minders through the area were enraged over Hatfield’s “cold blooded murder” and they began to pour out of the mountain and take arms along the Little Coal River in Boone County. Union Leaders met with Governor Ephraim Morgan who dismissed the miner’s petition of demands thus resulting in a rally of miners in Boone and Kanawha Counties to march to Mingo to free miners and end martial law.

On August 20, thirteen thousand minders gathering in Lens Creel of Kanawha County began to march towards Logan County commandeering a C&O freight train along the way to quickly advance to Madison, WV.

Standing in their way between Madison and Mingo County was Logan County Sherriff Don Chafin who had begun to set up defenses on Blair Mountain. Chain had been a longtime supporter of coal operators in the area and had played a major part in keeping unions out of Logan County. Backed by the financial support of the Logan County Coal Operators Association, Chafin created the nation’s largest private armed force of nearly 2,000 men. The first skirmishes resulted in President Warren Harding threatening to send in federal troops and B-1 bombers. The miners agree to return home after a long meeting in Madison. Once Chafin heard of the miner’s decision, he began to kill union sympathizers in the town of Sharples, with women and children being caught in the crossfire. Miners re-organized and marched on Blair Mountain on August 19, 1921.

The miners were outnumbered and out positioned with company detectives having higher ground. Private plans were also hired by the coal operators to drop homemade bombs on the miners.

Union leader Bill Blizzard realized that the miners were not prepared for this type of battle and gave word on September 2nd to return home when federal troops arrived. Many miners fearing jail and confiscation of their guns cleverly hid their rifles and handguns in trees and under rocks all over Blair Mountain.

Following the battle, 985 minders were indicted for ‘murder, conspiracy to commit murder, assessor to commit murder, and treason against the State of WV’. Many were jailed until 1925. United Mine Workers Association membership plummeted from 50,000 to 10,000 and was not established until 1935 in WV’s southern coal fields.

The battle of Blair Mountain raised awareness of the appalling conditions faced by miners in dangerous mining operations and led directly to a change in union tactics from take up arms to taking on political actions to combat abusive and poor working conditions. 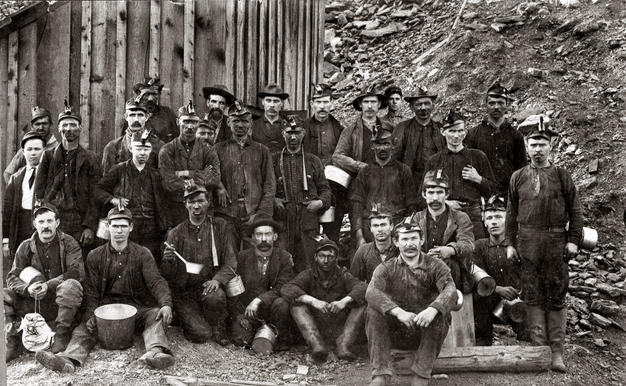